When Dr Who had emerged from his Tardis, which had excelled itself by materialising in the most secluded corner of a pleasant meadow, he had waxed rather lyrical, at least in his own mind, about the glories of nature and the pleasing freshness of green fields. While climbing a rickety stile, with only a little difficulty, he had spotted a collection of modest dwellings that stood but a short distance away. Now, his walking cane in hand, he was approaching a bustling market at the centre of a village. A casual enquiry gave him the name of the place, Stenton Abbas, and an overheard reference to ‘Bloody Mary’ having been ‘shovelled under last year’ confirmed the date as 1559. 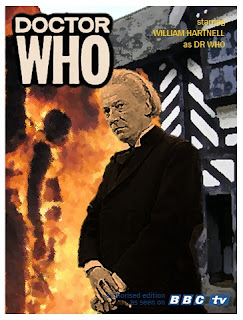 The villagers were serving or buying at stalls or carts displaying fruit, vegetables and freshly baked bread as well as fish, meat and ale. A middle-aged woman, tall, grim-faced beneath a high, brimmed hat and carrying a basket, stood by a fish stall regarding both its wares and the two men offering them with suspicion.

‘See this, mistress,’ declaimed the younger of the two sellers, holding up a large specimen of their merchandise. ‘Fresh as a daisy, caught this morning. You’ll not find better round here. Purchase while we have the stock. Soon be all gone!’ He swung the unfortunate creature from side to side encouragingly.

The woman pursed her thin lips. ‘Let me see the scales.’

The young purveyor held out the fish for her careful, flint-eyed examination. She prodded it with a thin forefinger before nodding with seeming reluctance. ‘I’ll take it off your hands.’ Her grey eyes met his challengingly. ‘For a price that suits me, that is.’

Dr Who had watched the exchange with some amusement but was distracted from the haggling over a price when, on the other side of the road, a pair of upstairs windows, the frames painted bright green and the panes diamond latticed, were suddenly flung open to disclose a woman dressed in vivid orange. She called out something he didn’t catch in a raucous voice that made him flinch, leaned forward and tipped away the liquid contents of what looked like a wooden bucket. Several unfortunates didn’t move quite fast enough and found their garments splattered with who knew what. The woman, uncaring, slammed her windows shut.

‘Disgusting habit,’ snorted the martinet at the fish stall, ‘and typical of her. A dirty cat, she is, and in more ways than one, though I’m not one for gossip.’

She glared at the Doctor as if daring him to proffer a contrary opinion.

The old time traveller smiled placatingly, then realised that a hush had fallen over the crowd gathered at the market. He turned to see the villagers watching with expressions that were now stony as a small, grim-looking procession approached, led by a white-haired, flint-eyed old man in ecclesiastical garb.

‘Bishop Snaith,’ said the forceful woman, firing off the words as if expelling something distasteful from her mouth. ‘The Derbyshire Satan’, she added, in further elucidation.

Evidently, thought Dr Who, his informant had accurately identified him as a stranger in need of enlightenment.

The procession made its way past the stalls to a wooden stake, which he had not noticed until now. It was driven into a patch of ground that was scorched and blackened – from previous burnings, he swiftly understood. The stake was already surrounded by bundles of sticks, firmly tied together and lying quiet and inert as yet but nonetheless destined, when crackling and bursting with flame, to convey their victim into oblivion. No doubt the long-suffering inhabitants of this particular area of rural Derbyshire had long since grown used to these trappings of a horrifying method of execution, for it was only with the arrival of Bishop Snaith and his group that the ordinary business and chatter had been abruptly dispelled.

‘Who burns today?’ the Doctor inquired heavily of his sharp-eyed new acquaintance.

‘Alice Marsh,’ she responded. ‘Condemned for reading the English Bible and infecting others with her so-called presumptuous knowledge.’

The victim, a thin, mousey-haired, grey-faced girl, her eyes vacant as if it was now beyond her to grasp the situation, made no protest or any attempt to escape but stared blankly and disinterestedly when they reached the stake and firewood as though totally unaware of the connection these items had with her own imminent fate.

Bishop Snaith, guardian of souls in Stenton Abbas, Walberford, Sotherwick and several other surrounding villages, his sad and fatherly smile seeming to express his eternal regret at this necessity while being quite at variance with the terrifying intensity of the religious fervour in his eyes, was gratified to observe the size of the crowd around him. The idea of heretics being burned on market day so that the punishment would be seen by the largest number of people possible was, he thought with satisfaction and by no means for the first time, quite a sound one. But then he was blissfully unaware that today the notion would prove unwise and perhaps qualify the occasion for the status of the exception that proved the rule.

Dr Who was plucking a few historical facts from the back of his mind. When Mary Tudor, the embittered daughter of blood-soaked tyrant King Henry VIII, who had lain in his grave at Windsor for twelve years at this date, had become queen she had driven England back hard upon the Catholic shore and embarked upon a campaign of religious persecution that had earned her the name ‘Bloody Mary’ and the hatred of a large proportion of her subjects. Protestants accused of heresy had included the old King’s adviser and confidant Thomas Cranmer, Archbishop of Canterbury, who had perished in the ‘cleansing’ fires at Oxford in 1556.

‘So Bishop Snaith has displayed a great zeal for this kind of activity, has he?’ the Doctor enquired of his companion.

'His enthusiasm for it must have exceeded even Bloody Mary’s,’ she answered. ‘He’s notorious for his cruelty against those he accuses. He’s hounded countless men and women to death without mercy.'

‘But why is it still going on, h’mm? Queen Elizabeth, as a Protestant herself, cancelled her late sister’s orders when she came to the throne last November, did she not?’

‘Snaith is totally obsessed by his crusade against heretics. He ignored the changes in London and has continued to select victims for his fires. We’re in the country, a long way from the capital, and so far nothing has been done to stop him. His unquenched appetite for the burnings has aroused disgust even amongst the Catholics here.


Bishop Snaith addressed two burly young men, his own servants, who stood on either side of the doomed girl: ‘You may prepare this poor creature, so lost in her wickedness and sin and undeserving, it may seem, of God’s mercy, for her purification,’ he declaimed in ringing tones. ‘There shall be mercy when her heresy has shrivelled in the purifying flames together with her wretched body and Alice Marsh’s purged soul is taken by the Lord unto himself.’

But as the two underlings moved to do their master’s bidding, Dr Who stepped forward.


‘My Lord Bishop, of your charity, will you not reconsider this poor child’s case? She is but young, and may have been led astray,’ he said boldly, choosing his words carefully and resisting the temptation to rail against the fanatical and pitiless cleric before him.

Snaith’s eyes came to rest on the Doctor. There was menace in them, but his voice sounded regretful. ‘Alas, only the flames can liberate her soul,’ he declared, shaking his head sadly.
‘Did she not recant?’

Snaith hesitated. ‘She did, but she dissembled to save her earthly body and does not truly reject her heresy.’

‘Perhaps, with further tuition, she may yet see the light and embrace the true faith,’ persisted Dr Who.

‘She will not, for with God’s guidance I, his representative, perceived the true depths of her determination to follow the dark path of Satan. The fire must consume her.’

Snaith tendered the outspoken old man a forbidding stare. It was an unmistakeable warning not to continue his attempt to interfere and reluctantly the Doctor heeded it. He was well aware that he shouldn’t have intervened even as far as he had. If a horrific death at the stake for this poor girl was part of history then it had to take place.

‘You see?’ said the woman he had been talking to.

The Doctor nodded sombrely. He always felt at his most helpless at times like this.

‘You did your best,’ she told him grudgingly, ‘but perhaps the time has come to take the bull by the horns.'

Before he could say a word or move to prevent her, she strode forward. In a voice that nobody present could fail to hear, she effortlessly engaged the attention of the crowd. ‘Will you all stand by and let this servant of the devil wreak his evil on yet another of our number?’ she demanded.

Bishop Snaith fixed her with the piercing stare that could terrify the bravest of people. ‘Hold thy impious tongue, Annie Goather,’ he rasped, ‘that you shall not prove your own soul in need of the fire’s balm.’

‘Our gracious Queen Elizabeth herself has forbidden the kindling of fires for the burning of her subjects.’ Her fierce stare swept across the gathering and she waved a hand towards the Bishop. ‘Yet the Derbyshire Satan here still follows the orders of Bloody Mary that he may feed his own appetite for the blood of good English folk.’ She pointed a long, bony finger directly at Snaith. ‘I say this priest is a murderer and a traitor besides, and that no true servant of God can in good conscience abide the affront of his presence.’

‘Secure the heretic to the stake,’ ordered Snaith, glaring sternly at his two servants, who were staring incredulously at Annie Goather. They hastened to do so, but paused again as she walked right up to them.

‘Obey one more order from your infamous master and share the punishment that will surely be his,’ she warned.

The two men exchanged glances in a joint agony of indecision.

‘We shall surely burn ourselves if we hinder His Grace, Mistress Goather, as will you...’

For a moment, as Dr Who remembered afterwards, the scene appeared to freeze into a tableaux. Total silence reigned.

It was then that Alice Marsh, perhaps brought out of her trance-like state by the goings-on around her, spoke up, her voice slicing incisively through the temporary quietude.

‘Not if our ‘holy’ Bishop Snaith himself be the next, and the last, to burn. I ask you, could he then feed more innocents to the flames?’ 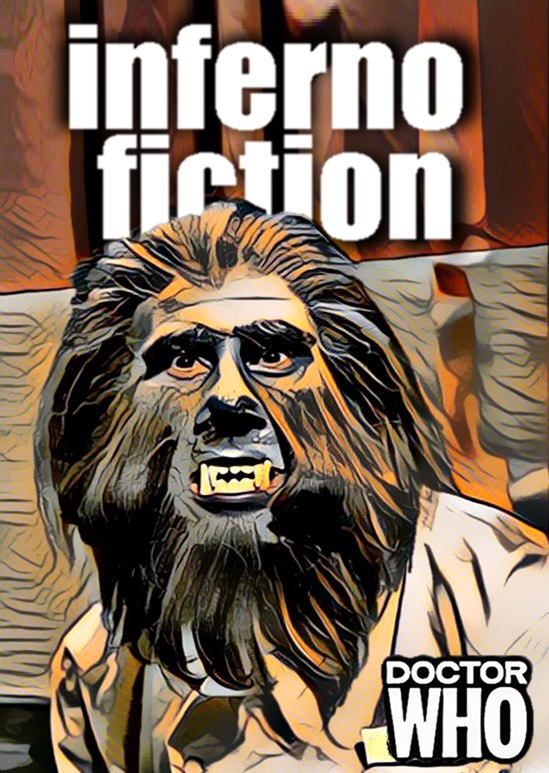 Inferno Fiction is an on-line Doctor Who Fiction Fanzine. First created in the 80's when fanzines in the printed form were the norm, the fanzine has now leapt onto the world wide web and is enjoyed by many across the world!
The stories featured are from the original pages of the printed fanzine and now include a collection of new material.
If you would like to contribute then please email them to:
infernofiction@gmail.com 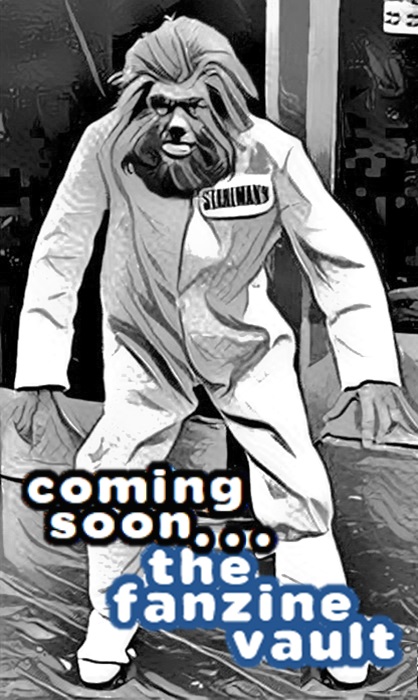